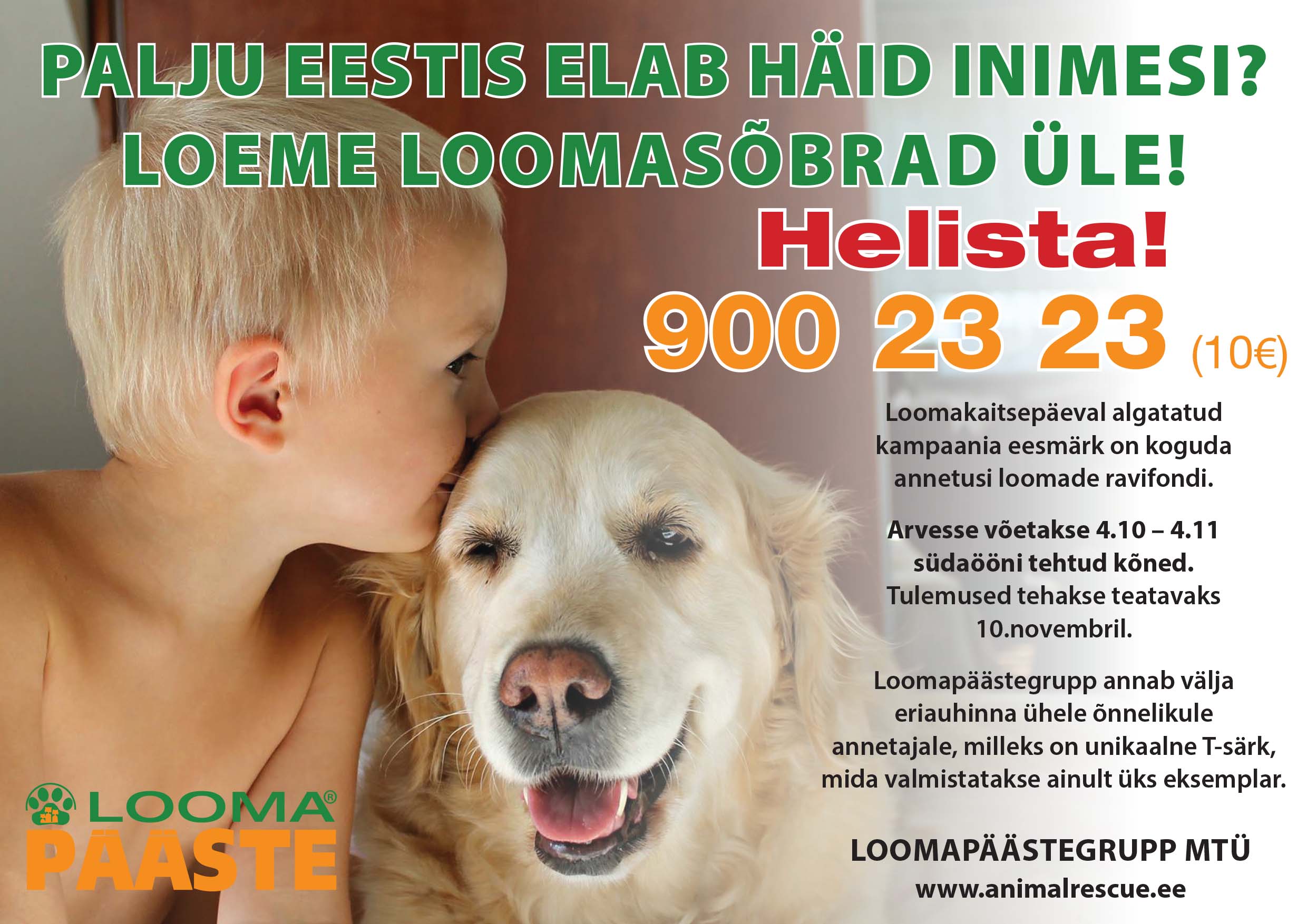 Today, on World Animal Day, Animal Rescue Group NPO starts a campaign and invites good people to call the donation number 900 23 23. The call price is 10 euros and each person is asked to call only once. The calls made from 4 October until midnight of 4 November will be taken into account.

The result of the count and the donation amount collected will be announced on 10 November. Animal Rescue Group will also award a special prize to one lucky donator, which will be an animal lover’s T-shirt with a completely unique design, made in only one original. People who have made a donation to bank account EE437700771003183318 of the Group will also participate in the drawing of lots.

“The aim of the campaign is to find out how many such people capable of feeling empathy do we have who feel for animals, and naturally to collect donations, because today we can help only a fraction of the animals and birds needing help,” said Main Coordinator of Volunteer Work  Katrin Lehtveer. “We want to think and we hope that there are more good people than bad, but looking at the number of animals in need, our volunteers do not have any reason for such optimism.”

Animal Rescue Group is today the people’s movement in the field of animal protection with the fastest-growing membership. The core of the Group is formed by Regional Managers who have left the Estonian Union for the Protection of Animals, in whose opinion an organization focused at rescuing animals in need of emergency care is much more effective and operational being autonomous and independent. Immediate rescue of animals and ensuring medical treatment is voluntary activity and none of the members of the Group are paid for it.

There is no corresponding medical treatment fund in Estonia and this leaves hundreds of sick and injured animals and birds in agony due to the lack of treatment money. Dozens of representatives of other species perish and are injured on Estonian roads every day, their only hope being the donators’ compassion and empathy.

According to the founder and CEO of Animal Rescue Group Heiki Valner, the Group possess the capacity to arrive quickly on the scene at least in the cities, but all this is of no importance if they are unable to pay medical bills.

The harsh reality today is that the specialists of Rescue Board or Environmental Board, who have gone to help an injured animal, simply take the victim out of the people’s sight to die somewhere else. Animal Rescue Group and Rescue Board have started negotiations to end such a cruel and abnormal situation, and hopefully we will reach a contract according to which the animals and birds needing medical treatment will be handed over to us in the future. Unfortunately, a significant increase in the number of victims further highlights the problems in connection with the payment of medical bills.