“The winds are raging outside? How are your animals coping?” 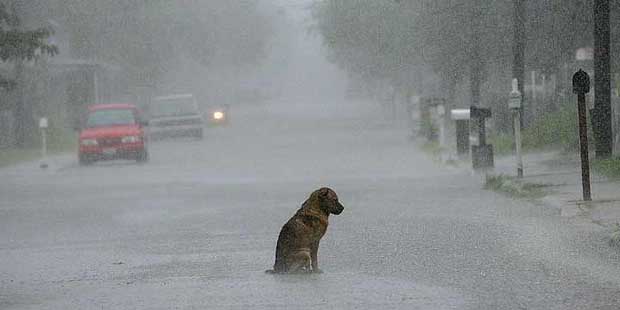 According to the Estonian Weather Service, autumn storms are here and it is predicted that tempestuous weather will continue even during the next week. In this connection, Animal Rescue Group asks you to examine critically the kennels and buildings that are supposed to provide protection to domestic animals. In addition, the keepers of animals must ensure that the animals under their care would not get trapped in tidal water.

In addition to posing a threat to people, breaking trees and branches and other litter blown into the air by wind gusts also pose a threat to animals. The shelters providing protection to animals must be definitely critically inspected and it must be ensured that trees or other similar bigger objects could not fall on them. The most sensible thing would be to keep the dogs and cats inside during the autumn storm.

“The Weather God will evidently thrash West Estonia the most and this was also evidenced yesterday,” said Marge Kaju, Saaremaa’s Regional Manager of Animal Rescue Group, and added that the statement of an animal owner in Pärnu County that the storm arrived unexpectedly is not true. “The guy just hoped that the wind will change direction, however, this did not happen and that is why his bovine animals were trapped in the rising seawater! This is pure laziness, unwillingness to act and carelessness! Nothing else!”

Animal Rescue Group asks the farmers to ensure that farm animals would also have the possibility to take cover from the storm and prevent the situation where the animals are caught under breaking trees. People living on the coast must definitely watch that tidal water would not endanger the animals outdoor and also in cattle sheds. According to the regulation applicable in Estonia, a dog kennel must be waterproof and fireproof. The dog’s bed must also be at such a height above the ground that the water could not accumulate there under any circumstances.